They Want My Money...They Just Can't Have It


Recently, Bank of America inspired a consumer revolt when it tried to impose a $5.00 a month debit card fee on its customers. Some people apparently thought the fact that Bank of America (1) initiated the use of debit cards to save money in the first place, (2) was not really losing any revenue from its patron's use of debit cards, and (3) was rolling in more dough than it ever had, made the whole added fee proposal stink like a pair of old lady's orthopedic shoes.

Outrage on the part of its customers forced Bank of America to drop their debit card fee plan. Part of the reason for their about-face could be directly attributed to work on the part of activists in the Occupy Wall Street mold who launched the "Bank Transfer Day" on Facebook. The campaign encouraged Americans to move their funds from multinational banks to credit unions, which work in the direct interests of their customer-shareholders.

Since I was a teen, trying to save funds for a planned trip to Europe, I've always had my savings in small local banks, rather than big multinational ones. I always felt that the customer service was better at local banks and that they were more attentive to my needs. So, I have no problem with local banks; my problem is corporate banks that are really not in the banking business to serve individuals and communities.

Last year, when I had to open up a business account for my publishing company, I immediately thought of Nassau Educator's Federal Credit Union (NEFCU), a credit union originally designed for teachers like me. The rates were great, there were no hidden fees, and, while I was setting up my business account, I was treated like a human being instead of like a number on an accounts received ledger.

I don't believe for a minute that Bank of America has learned its lesson from its latest outrage. As soon as the attention of the American public has turned to some other issues, you can bet your bottom dollar that BoA will be back with some other nefarious way to bilk Americans out of their hard-earned dollars. And this, unfortunately, is also true of every other corporate bank as well. Their only concern is to increase share-holder revenue, and the share-holders are definitely not you and me.

So if you haven't checked out what your local credit union has to offer you, why not do it now?

Find a credit union near you. 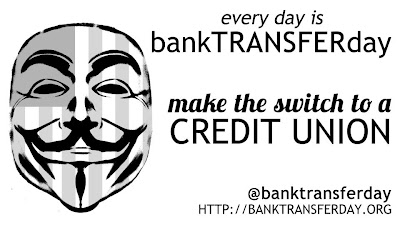