"I agree with you that there is a natural aristocracy among men. The grounds of this are virtue and talents. Formerly, bodily powers gave place among the aristoi [aristocrats]. But since the invention of gunpowder has armed the weak as well as the strong with missile death, bodily strength, like beauty, good humor, politeness, and other accomplishments, has become but an auxiliary ground for distinction. There is also an artificial aristocracy, founded on wealth and birth, without either virtue or talents; for with these it would belong to the first class. The natural aristocracy I consider as the most precious gift of nature, for the instruction, the trusts, and government of society. And indeed, it would have been inconsistent in creation to have formed man for the social state, and not to have provided virtue and wisdom enough to manage the concerns of the society. May we not even say, that that form of government is the best, which provides the most effectually for a pure selection of these natural aristoi into the offices of government? The artificial aristocracy is a mischievous ingredient in government, and provision should be made to prevent its ascendency.?I think the best remedy is exactly that provided by all our constitutions, to leave to the citizens the free election and separation of the aristoi from the pseudo-aristoi [pseudoaristocrats], of the wheat from the chaff. In general they will elect the really good and wise. In some instances, wealth may corrupt, and birth blind them, but not in sufficient degree to endanger the society."

What we have in the United States at the present time is a situation in which there exists, for all practical purposes, an artificial aristocracy that is based upon wealth and social status.  The members of this aristocracy are no better than the rest of the citizenry, but they were lucky enough to have been born into privilege.

Our founding fathers were naturally suspicious of such hierarchies among citizens based upon socio-economic class distinctions.  But they were also well versed in classical moral and political theory, and believed that, in fact, there existed natural differences among human beings.  Jefferson and Adams, for example, believed in what they referred to as "a natural aristocracy among men" that was based upon the possession of talent and virtue.  Some have it, they believed, and some don't.

Furthermore, they believed that it was in the interest of society as a whole for these natural aristoi to be given the opportunity to rule their less gifted and less moral fellow citizens.

Naturally, we Americans prefer not to believe that some of us are just plan better than others.  But that doesn't mean that such a natural aristocracy doesn't exist among us.  And if it does exist, wouldn't we all be better off acknowledging this and getting out of the way of those who might actually be better able to lead society?

My question, therefore, is:  Do you think that there is a natural aristocracy among human beings that is based upon the possession of talent and virtue?  And, if so, what might the implications of such an idea be for the way we ought to organize political society?
Posted by Mike at 7:48 AM 6 comments:

The Importance of Absolutes 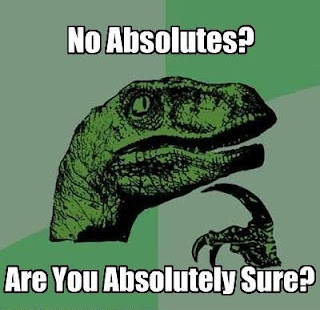 We live in a world in which there is a strange dichotomy concerning absolute truth.  An absolute is a truth that transcends our own subjective beliefs or opinions; this would be a truth that is not my truth or you truth, but The Truth.

On the one hand, there are plenty of people who live their lives passionately defending absolutes that probably reflect personal bias, rather than being truths that can be defended rationally.  I'm talking about supposed absolute truths like:
The problem is that we often inherit ideas about what is true from our families, our communities, from the political groups to which we belong, and from our religions.  These supposed truths may not make much sense at all, but they become our eternal truths, our sacred dogmas.  We live are lives according to them, engage in conflict when they are challenged, and sometimes are even willing to die to defend them.

I have no doubts that the world would be much better off if people exercised a but more discretion when choosing the absolutes that are going to guide their lives.  And, if you can't come up with some rational arguments in defense of your Absolute, then that should tell you something right there.

I also think that it is logically impossible to negate the possibility that at least some absolutes exist.  The relativists says that there are no objective truths.  But doesn't this claim itself take the form of an absolute?  The atheist says their is no God...again an absolute.  The skeptic argues that very search for the truth is misguided...but this rejection of the truth becomes its own absolute.

In short, if you are doing philosophy, you can't really help making Truth claims, and there's Absolutely nothing wrong with that.  A good absolute--whether it is metaphysical, religious, political, moral, or aesthetic--can provide the kind of order and meaning to life that we are all looking for.

I have plenty of absolutes in my life.  Some have served me extremely well in life and have withstood the test of numerous challenges from men and women much smarter than I am.  Others haven't born up quite so well under scrutiny and I am in the process of re-evaluating them.  In fact, as I get older I find myself continually reexamining the sacred truths that have hitherto guided my life.

So what are your own absolutes, anyway?  Can you argue rationally in defense of them or have they taken on the form of unreflected dogma?  And if you had to, could you defend your absolutes if they were challenged by the contemporary equivalent of a Socrates?

You might just be surprise where this kind of reflection take you, so give it a try!
Posted by Mike at 7:20 AM 12 comments:

The Undecided Voter: Or Why Plato Hated Democracy

This wouldn't be so bad of these 6% were the wisest, most politically astute, most intelligent individuals in our country.  Unfortunately, they are what has come to be known as "low-information voters" -- people who are either too lazy or too apathetic to adequately inform themselves about the issues facing our country and the differences between the two candidates running for office this year.

Some political pundits have celebrated undecided voters as being somehow more discerning and contemplative than those of us who know damn well who we are planning to vote for this year.  But I for one find it very troubling that the votes of the most politically ignorant among us count more than the votes of those who have actually taken the time and trouble to study the positions and records of those running for President.  So, instead of celebrating the undecided voter this year as paragons of civic virtue, let's just call them what they really are (in Bill Maher's terminology, not mine): ignorant dipshits.

Actually, the Philosopher Plato believed that democracy itself was the problem.  When political decisions are made by those who don't have the proper knowledge, training, and expertise, the end result can only be harmful to society.  That's why he had his special elite -- his Philosopher-Kings -- be responsible for running the society.  These men and women would live a spartan-like existence, uncontaminated by the lure of filthy lucre, and would have the vision of the Good (not your good or my good, but THE GOOD) to guide them as they rule.

Now, very few people in contemporary society would probably support the idea of a political aristocracy led by a small philosophical elite.  But Plato's critique of democracy -- government by those who really don't have the knowledge or temperament to govern themselves -- is worth considering, especially in our own society, where our democratic institutions seem to be in crisis.

The solution, however, is not to eradicate democracy, which may be not be the most perfect system of government, but is certainly the best of all those that have been tried.  I tend to agree with Thomas Jefferson, when he wrote, "I know of no safe depository of the ultimate powers of the society but the people themselves; and if we think them not enlightened enough to exercise their control with a wholesome discretion, the remedy is not to take it from them but to inform their discretion."

If Jefferson is right, the solution to our own political malaise is to better educate Americans -- that is, to provide as many of our fellow citizens as possible with the knowledge and wisdom they need to exercise prudent self-governance.  What we need, in other words, is for the vast majority of our citizens to become Plato's philosopher kings and queens, and to have a vision of the good that can help guide our country through the 21st century.

Of course, this is almost an impossible goal.  When you consider those millions of undecided voters out there and millions more that are simply focused on their own economic self-interests, you have to wonder whether true government by the people (as opposed to the fictitious sort that we currently have in our own country) could ever be possible.

Hence Plato's wholesale rejection of democracy as a viable political system.
Posted by Mike at 7:41 AM No comments: