Debate on Religion from True Detective 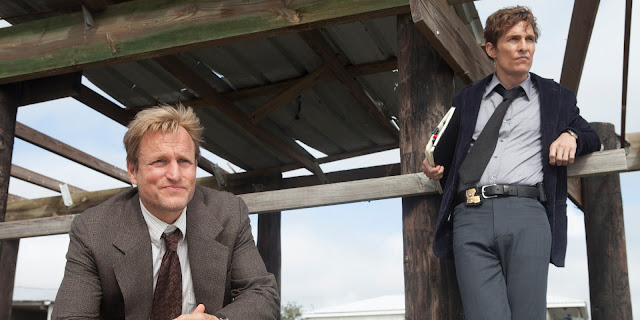 
I’ve begun watching the first season of the HBO series True Detective and I have to confess that I’m greatly enjoying the compelling story lines and complex characters in the series.  But even more than that, I’m really intrigued by the fabulous dialogue, written by Nic Pizzolatto.  It certainly came as no surprise to me to discover, as I did recently, that Pizzolatto was a former philosophy major at Louisiana State University, because the series, perhaps more than any other I’ve seen in a long time, is chock full of philosophical ideas at every turn.

The third episode in particular blew my mind with its fairly sophisticated treatment of theism and organized religion (see the clip below).  To set the scene up, two detectives, Rust Cohle (played by Mattew McConaughey) and Martin Hart (played by Woody Harrelson) are investigating a ritual murder that leads them to an outdoor evangelical service.  As they listen to the preacher give his sermon, Rust, an atheist and skeptic, shares his cynical views about the nature of religious belief to his fairly devout colleague, Martin, who feels compelled to offer a defense of religion.   As the scene plays out, we see these same characters later on as they continue to reflect on the debate that occurred between them a decade earlier.

From Rust’s perspective, those who believe in the existence of a supreme being are basically pathetic, irrational suckers who are so fearful of life that they are willing to accept ridiculous fairy tales as truth.  Martin, on the other hand, sees religion as a positive element in society, without which we couldn’t survive as a species.

Rust’s position is basically a contemporary spin on the psychological critiques of religious belief developed by the great 19th century “Masters of Suspicion”—Nietzsche, Marx, and Freud.  Although their positions on religion differ slightly, all three see the origins of religious belief in fear of the sufferings of this world and anxiety over the inevitability of death.  Because we are basically cowardly, weak and childish, we create the illusion of a benevolent father figure (God), who loves us unequivocally and who offers us the soothing balm of eternal life with him after death.  True maturity, these thinkers argue, demands that we learn to accept the world as it truly is—full of pain and suffering, Godless, and terminal—and start taking our lives here and now much more seriously.

Martin response is more sociological in nature than theological.  Notice he never argues directly for the existence of God or the truth of religious belief, but instead makes the claim that we need religion for three reasons: (1) It’s a binding force, enabling some semblance of community to exist among individualistic human beings; (2) It keeps us from acting on our more vicious natural instincts by instilling in us the fear of divine punishment; (3) It helps us to function in everyday life, by enabling us to overcome the existential fear that all human beings—even atheists—possess and which otherwise would cripple us.

What is missing in this debate is a truly theological or philosophical defense of religion of the kind that we find in great theistic thinkers like Anselm, Aquinas, or even Dostoyevsky.  The only remotely theistic argument in the scene is the one made by the preacher, who seems to appeal to exactly the kinds of fearful, narcissistic longings that Rust criticizes so well.   So we’re left in the end with two very cynical options:  (1) religion is basically a con game that needs to be rejected outright, though there may be nothing positive in the end to take its place (Rust’s position) or (2) Religion needs to be embraced, not because it’s necessarily grounded in anything true, but because a world without it would be too horrible to contemplate (Martin’s position).

Perhaps the absence of a strong theistic defense of religion in the series is intentional.  I don’t know what Nic Pizzolatto’s own views on theistic matters are, but it could be that he gets the religious zeitgeist of the times pretty well.  In the end, we don’t really give a damn whether something (i.e., God, the afterlife, original sin, etc.) is true or not.  The only legitimate question for us seems to be “does it work for me?”  If I feel better about my life by believing in a Supreme Being, then  I’ll believe in one.  If I think that it’s necessary for society to be grounded in religious institutions in order to function effectively, then  I’ll support organized religion.  But when religion suddenly starts to seem like something bogus to me, or when it no longer seems to fulfill its pragmatic function in society, then I’m going to ditch it like a handful of smelly dung.

So maybe, like the characters in True Detective, we don’t really care about religious issues at all.  All we really care about is feeling good.  And if religion makes us feel good about ourselves, then it automatically is valid; and if it makes us feel badly about ourselves then it is just as assuredly invalid.  But, if this is all that religion really represents to the theists and non-theists alike, it seems to me a fairly silly, superficial thing….a kind of spiritual pop psychology for those who lack the ability to think critically and rationally about the human condition.

Or am I, like the main characters in True Detective, missing some important piece of evidence here?
Posted by Mike at 7:24 PM