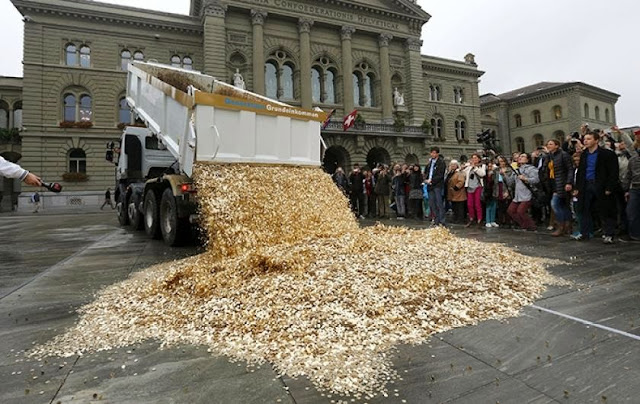 I came across a really provocative piece in last Sunday's New York Times Magazine. In an article entitled,  "Take One Income, Please" Annie Lowrey describes a movement that is growing in Europe to establish a guaranteed minimum wage for all citizens.

While this may seem like the ultimate liberal solution to the problem of poverty, I was amazed to learn that the great intellectual guru of the right, Charles Murray, has supported a similar idea in his new book, In Our Hands: A Plan to Replace the Welfare State  (There's an interesting review of this book on the Crooked Timber blog).  Murray's main objective, of course, is to completely undo the entire apparatus and rationale for the modern welfare state, so liberals might be tempted to dismiss him off-hand.  But this would be a mistake, because I think that the idea has some merits that might actually bridge the great chasm that divides liberals and conservatives.

What Murray proposes is indeed to completely eradicate all government welfare programs.  In their place, he proposes giving $10,00 a year to every American citizen over 21 years old ($3,000 of which would have to be used to buy health insurance).

The objection that can be raised to this idea is that some--perhaps many--of the citizens who receive this guaranteed income will spend it foolishly and will actually be worse off than they would be under our current paternalistic system.  While I would agree that there will always be those Americans  who would squander whatever funds are given to them on gambling, alcohol, drugs, or any other number of vices, I think that a guaranteed minimum income would have the opposite effect: it would unleash the entrepreneurial spirit that most Americans have and give them the capital they need to take control over their own lives.  No longer would the poor be the passive beneficiaries of governmental largesse, but rather could decide for themselves how their own money would be spent.

I think that the main reason why this idea appeals to me so much is that, as I get older, I'm beginning to question whether it's in the interest of human beings to be subject to an all-powerful, all-knowing entity like government that controls such a huge amount of our collective wealth.  We've seen plenty of evidence recently that our government often  can't  be trusted to use the funds that it confiscates from citizens wisely or fairly.   Our tax dollars, rather than benefiting ordinary citizens, more often than not seems to be used to prop up the military industrial complex and to line the coffers of multinational corporations.

Perhaps my libertarian friends are right:  the very kind of massive, all-intrusive governments that we've established during the post war period may very well be part of the reason why middle class Americans (and Europeans for that matter) find their economic positions becoming eroded and their civil liberties deteriorating.

The idea of a guaranteed minimum income certainly meets the condition for fairness.  The question is whether a system like this would create greater justice and equality or just produce even more poverty and desperation among the most vulnerable Americans.