On Civic Engagement and Political Education

It really distresses me how little average Americans—even supposedly intelligent, college-educated people—know about the political process and the very serious social and economic issues that confront our nation and the world. I always loved the following quote from Thomas Jefferson, because it seems self-evidently true: “I know of no safe depository of the ultimate powers of the society,” he wrote, “but the people themselves; and if we think them not enlightened enough to exercise their control with a wholesome discretion, the remedy is not to take it from them but to inform their discretion.”

Americans need to be educated about the issues, if we are to become a citizenry that has the wisdom and the understanding to govern itself, and if we are to avoid slipping even further away from the democratic ideals of our Founding Fathers. The first step in this process, I believe, is to clarify where we stand on the issues and to assess which candidates running for political office have positions most in line with our own.

Recently, Meritta Cullinan, a colleague in the Sociology Department at Molloy, sent me a link to an on-line survey that in a very simple way attempts to do just that:

It took me about 3 minutes to do the survey and the results were somewhat surprising in my case: 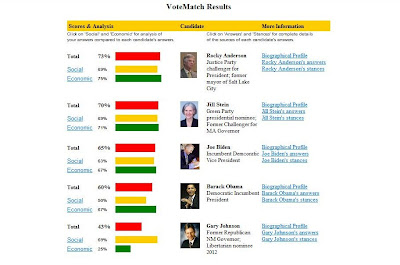 Apparently, the candidate whose views on the issues are closest to my own is someone I didn’t even know was running for President, and whose party I didn’t even know existed until now—RockyAnderson of the Justice Party.
It wasn’t too surprising to me that I was close in political leaning to Jill Stein of the Green Party: I was a member of that party for several years and environmental issues are extremely important to me. But Rocky Anderson? Who the hell is he, anyway, and what exactly does he stand for? As I explored his website, I began to realize that he was indeed a candidate that I probably could endorse without feeling as though I was polluting my soul.

In an ideal society, the Rocky Andersons, the Jill Steins, and the Gary Johnsons of this world would have at least the possibility of becoming President, because there are an awful lot of Americans whose political views are probably more in line with those of these candidates than they are with those of Barack Obama or Mitt Romney. But the two major parties seem to have the system completely locked up. They have all the funding, they have access to all the advertising, they even control our presidential debates, so that third party candidates can’t even get their views heard by the American people. We essentially have a two party political system that exists almost exclusively to prevent any other political voices from ever being heard.

But it doesn’t have to be that way. And the first step, as I’ve already indicated, is to clarify your own views on the issues and look for candidates who share your own values and ideals. The second step is to stop worrying so much about “electability,” because if you feel compelled to support someone whose values and ideals are not in synch with your own, you will always be disappointed in the end.

If you’ve read any of my previous posts on the 2012 election, you know who I feel compelled to vote for in November. But in this election, I’m basically voting against a party that I believe has such horrific positions on the economy, the environment, and civil liberties that I almost have no choice but to support the other guy and his lame-ass party. In a sense, I’m voting to stop what I consider to be moral evil, and that is what’s driving me right now. But I have absolutely no regrets voting throughout the years for Green Party candidates like Ralph Nader and “Grandpa” Al Lewis, because I know that my vote was for a candidate I could truly believe in.

In a few weeks each of us will have to step into the election booth and make our own choice about who we will be supporting for President. In preparation for this act of civic engagement, I’d strongly encourage you to take the “On The Issues”survey to see who your ideal candidate might be. If you’re interested in exploring your own political leanings in a more involved way, I’d invite you to spend a little more time going through the excellent "Political Compass" survey that is also available for free on-line.

The worst that could happen is that you spend five minutes of your life and realize that the candidate you were planning to vote for anyway is the one most in line with your own positions on the issues. But, like me, you may just be surprised at the results you receive. And these results might even inspire you to start questioning your allegiance and loyalty to candidates and parties whose positions on the issues may in fact be quite far removed from your own.


So take the survey, and let us know your results and whether you were surprised about them or not.