I’ve always  had a real antipathy towards the 1970s.  Part of it undoubtedly has to do with the fact that I grew up during this decade and had to suffer through stagflation, the Carter presidency, and disco, which is justification enough, I suppose, for my hatred.  Compared to the magical 60s, the 70s also seemed like a downer, with none of the innocence and optimism of the previous decade.

But lately, I’ve begun to realize that the beautiful magic of the 1960s didn’t really end in January, 1970.  In fact the early part of the 70s contained much of the same spirit that made the 60s so much fun (woman’s liberation, the antiwar movement, student activism, and rock and roll).  The 70s that I’ve always hated, in fact, didn’t really begin until about 1977.  That’s when film began its precipitous decline with Star Wars and Jaws, two movies that are not bad themselves, but which signaled the death of the truly artistic film that had sprung up in the United States from about 1967 with films like Bonnie and Clyde and The Graduate.   It’s also when music began to be corrupted by disco and every song had to be obnoxiously danceable, instead of something you listen to intently with your friends in your parent’s basement.

I’ve recently undertaken a project to study 70s culture, and amazingly I’ve discovered that most of the films that I love the most come from the come from the early part of that decade:  Lovers and Other Strangers, The Godfather, They Shoot Horses, Don’t They?, Annie Hall, Monty Python and the Holy Grail, The Last Detail, Network, Patton, One Flew Over the Cuckoo’s  Nest.  There was a grittiness and an authenticity to these films that has never been captured since on film and probably never will be. 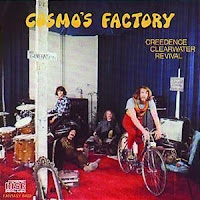 I’ve also noticed that many of the albums that I’ve come back to time and again over the years are also from this same period:  All Things Must Pass (George Harrison) Loaded (The Velvet Underground), Déjà Vu (Crosby, Stills, Nash, and Young), Cosmos Factory (Creedence Clearwater Revival), L.A. Woman and Morrison Hotel (The Doors), Born to Run (Bruce Springsteen), Tapestry (Carol King), Planet Waves and Blood on the Tracks (Bob Dylan),  Band on the Run (Wings).  Like the films of the early 70s, the music of that period had an honesty and integrity about it that I simply don’t find in later music.  Perhaps it was because the Viet Nam war was entering its most contentious phase or maybe turbulent politics of the times had something to do with it, but, whatever it was, there is a seriousness about the art of the early 70s that I think stands the test of time quite well.

And even the decadence aspect of the early 70s, unlike what came later, is all in innocent fun.  As a case in point, watch the video I posted from 1973 featuring the Defranco Family.  The hair is atrocious, the bell bottoms are ridiculous, and the dance moves utterly and completely preposterous.  But when one considers what the country was going through in 1973 (Remember Richard Nixon?), there’s an innocent and joyful quality to the music that is actually quite impressive.

So the next time any of us feel like bashing the much maligned 1970s, we should keep in mind that what we really hate is the rise of the 1980s, which began the slick and superficial cultural decline in the United States that has not yet ended.  1977 started what Bob Dylan quite accurately referred to as “the age of masturbation.”  Before then, from about 1967 (the Summer of Love) to about 1976, we had what I would refer to as the age of infinite possibility – a time when it really did still seem like we could end war, poverty, disease, and racism.    We may not have succeeded in achieving these lofty goals, but you can hardly blame the polyester-clad prophets of the 70s for that.  They did their part; we’re the ones who have forgotten what these great visionaries of the past tried to teach.
Posted by Mike at 8:36 AM