Income Inequality: Why We Should Care 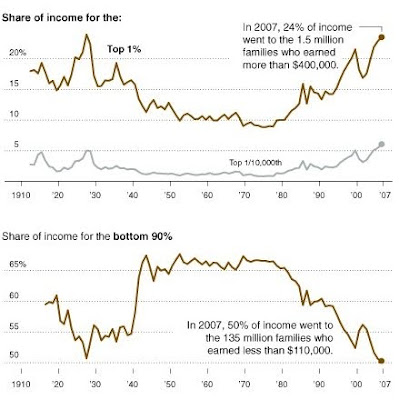 Some of my colleagues on the faculty think that my emphasis on income inequality as one of the biggest problems in the country today is misguided. One of my thoughtful friends from the Business Department, for example, while acknowledging that income inequality is "a problem and an issue," disputes the idea that this inequality is "the key driver of what ails the US economy."

I also heard supporters of Wall Street argue that the fact that the top 10% of the population is doing so well is a sign that they are doing what they are supposed to be doing as good capitalists--generating wealth. And that wealth, they argue, will eventually be put to good use, expanding business and creating jobs once there is a climate of greater economic certainty in the country (i.e., once Obama is driven out of office).

I've argued that the very inability of business people to understand the anxieties that Americans are experiencing is what is fueling the kinds of protests that we are seeing going on all around the country. And since (as the above graph clearly indicates) the richest Americans are getting richer at the expense of the average worker, these protests are only likely to get more extreme in the future as the middle class is forced to suffer with years of potential stagnation.

What we are experiencing, in fact, is a new Gilded Age--one in which the wealthiest Americans control more wealth, power, and political influence than they have almost at any other point in American history. Recent data clearly indicates that the wealthiest Americans now control almost exactly the same percentage of the nation's total income as they did at the beginning of the Great Depression. Income inequality in itself is not necessarily a problem. But the kind of radical inequality that we have now means that those with excessive wealth are able to buy elected officials of their own liking and lobby to weaken financial regulations and environmental protections (as they are currently doing). It means that we no longer have a government "by the people, for the people, and of the people"--a true democracy in other words--but a corporatocracy--rule by corporate interests for their own benefit.

This is not simply a "problem and an issue." It's a catastrophe for our democratic institutions.

During the Great Depression, it took someone like Franklin Roosevelt to save American capitalism from it's own excesses, greed, and shortsightedness. The rich didn't appreciate him for the financial regulations he put in place as part of the New Deal, but, in fact, Roosevelt was probably the greatest friend American capitalism had at the time. By moderating the excesses of capitalism, one could argue, Roosevelt gave us 40 years of economic growth that benefited business owners and workers alike.

Unfortunately, we have no Franklin Roosevelt on the public stage today. Republicans want to roll back all economic regulations and destroy the few government programs that still exist to protect the average American, and Democrats are too timid and corrupt to ever propose truly progressive legislation like we had during the New Deal or Johnson's Great Society.

So until the next FDR comes along, we probably have to resign ourselves to years of economic instability and hardship for the poor and middle class. But we certainly shouldn't expect those who are suffering most simply to disappear. There will be many more protests ahead of us, and these protests may in fact turn violent, as they already have in Europe.

That, unfortunately, is simply the price we will have to pay for our moral, political, and economic blindness. Consider it karma worked out on a societal level. In the end, we will most certainly reap what we have sown economically.

...and I'd hate to be working on Wall Street when that happens!
Posted by Mike at 8:22 AM